House of Naturalists (Dom Przyrodników) – The former seat of the Natural History Society adjacent to the St. Mary’s Gate. The Natural History Society was located here for 100 years from 1845 to 1945. Exhibitions of natural and archaeological collections were organized here. There was also a reading room with 20,000 scientific volumes. The building itself was built much earlier, as at the end of the 16th century, as Hans Köpe’s merchant home, and it was not the beginning of the existing building in this place, because previously there was a Gothic style tenament. As a result of war activities, Dom Przyrodników or the House of Naturalists was completely destroyed during World War II, just like the neighbouring St. Mary’s Gate. It was rebuilt between 1956-1961 in an external form close to historical one, but the original layout was not reconstructed. Currently, the Archaeological Museum is located here. 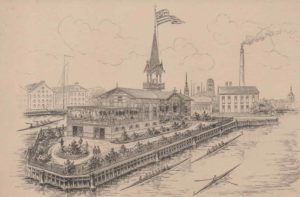 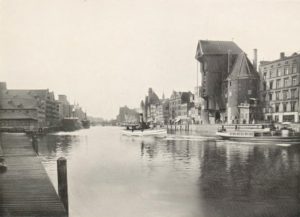 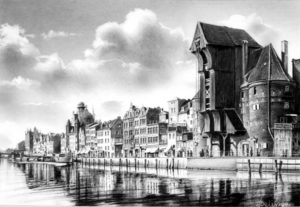 House of Naturalists The house in the mannerist style (also known as the Northern or Dutch Renaissance) is located at ul. Mariacka at number 26, next to the Mariacka Gate, with a side facade from the side of Długa Pobrzeże. It was built in 1597-99 for the merchant Hans Köpe, probably according to the design of Antoni van Obberghen. From the side of ul. Mydlarska.
The very high (30 m to the ridge) front facade received a rather restrained stonework decoration with a modest portal. The top is decorated with the typical mannerist ornamentation of intersecting straight and round bands. The architect used original elements, not found in other tenement houses in Gdańsk, to diversify the huge shape of the building visible from the Motława side. The side elevation was enriched with a multi-storey bay window finished with a double gable. The sheet-metal roof has an undulating form, repeating the lines of the gables of the front and rear façades. A 36-meter tower (including the spire), crowned with a beautiful cupola with a lantern, was added to the front facade. The Naturalists’ House The house was built in the years 1597-99 for the merchant Hans Koepe (most probably according to the design of Anton van Obberghen). A magnificent tenement house – built on the site of a Gothic house from the second half of the 19th century. 15th century – it combined residential and warehouse functions. Until 1637 it was in the hands of Peter Koepe (son), then it was owned by the Koenig family and Efraim Sonntag (in the years 1771-1839). In the second quarter of the 19th century